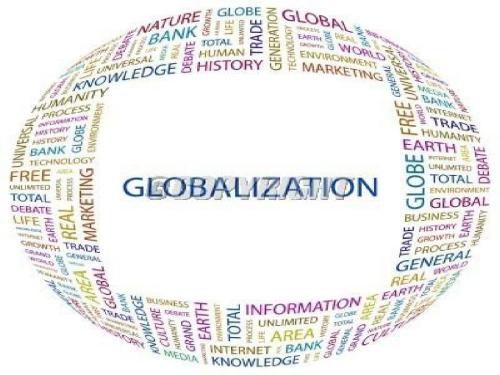 With the development of economy and technology ,more and more people come to realize that the contact between countries has become more and more closely frequent.

Nowadays almost everyone knows Coca-cola,and when we want to pursue all aspects of all-around development,we can't avoid staying in contact with other countries.So globalization has become a unstoppable trend. Different people have different point of views.Some people believe that globalization is a good thing ,because they enjoy the convenience and quality life globalization brings, whereas others argue that the developed countries are the only beneficiaries of globalization，and the developing countries in the course of globalization suffered a series of environmental pollution problems. Globalization is a double-edged sword.

As far as I'm concerned,we should look at both sides of globalization.Only when we seize the opportunity of development and meet the challenges can we gain the upper hand in the competition.

We must acknowledge that the negative effects are from a different kind than the positive ones.Therfor the negative sides, like low paiment in less developed countries are important to conciderate.

If we take the Euro zone for example, the economic-changes according to the gloablisation process are huge. Many companies have transfered their factories into cheaper production earies to compeat at the world markes. The results are rising unemployment rates in the “old industrial countries”

In regard to the other countries on the world market, like China, this job transfer is a big oportunity. But no one can denie that the consequences for the less developed countries with flurished economy, based on availability of cheap employees are highly important: globalization based on this facts brings enviromantal problems.

Nevertheless there are also posive reasons for globlaistaional effects. In general it is remarkable that there is a new tendency in “Thinking Global”. For instance people are willing to leran more languages and about othe cultures. Countries fromaly knowen as undeveloped, like India, getting chances to be the main leader in a certain field.

All in all it can be said that the effects of globalization are huge. The unerstanding of economic processes have changed completely. It is important to think in bigger terms, not just about the owen country. The positive things that this globalization process have brought must sensible us for the negative sides. The all over aim should be a world in balance, but this will be a long way.

Globalization is a declarationof war upon all other cultures. And in culture wars, there is no exemption of civilians, there are no innocent bystanders. Why should it be expected that ancient and rooted civilizations are going to accept this peripheralisationwithout a struggle? The answer to that is that globalization carries an implicit promise that it will relieve poverty and offer security—perhaps the most ancient of human dreams. Because of the power of global capitalism to create wealth, it is assumed that this priority must sweep aside all other human preoccupations, including all existing institutions, interpretations and searches for meaning in the world.

It is disingenuous to assume that economy, society and culture operate in separate spheres. This suggests that, one, exposed to the globalizing imperative, no aspect of social life, customary practice, traditionalbehaviour will remain the same.

There have been, broadly, two principal responses in the world, which we may call the fatalistic and the resistant. It is significant that among the most fatalistic have been the leaders of G-7, Ex-President Clinton said globalization is a fact not a policy choice Tony Blair said it is inevitable and irreversible. It may be considered paradoxical that the leaders of the most dynamic and expanding economies in the world offer such a passive, unchallenging view of what are, after all, human-made arrangements. These are among the richest and most proactive regimes, which can wage endless war on the great abstraction, that is terror, topple regimes and lay down one WTO law for the poor and another for themselves. Is their helplessness in the presence of these mighty economic and cultural powers?

There are two aspects to resistance. One is the reassertion of local identities—even if local actually means spread over very large parts of the world. The reclaiming of the local is often focused in the field of culture—music, songs and dance. This suggests an attempt to guaranteeit from the effects of economic integration; a kind of cordon sanitaria set up around a dwindling culture. Some people believe it is possible to get the best of both world—they accept the economic advantages of globalization and seek to maintain something of great value—language, tradition and custom. This is the relatively response. The other has become only too familiar: the violent reaction, the hatred of both economic and cultural globalization which may not merely perceive, but feel in the very core of their cognition, as an inseparable violation of identity. The resentment of many Muslims toward the U.S and Israel, the defensiveposturing of Vindu fundamentalism, opposed both to Islam and Christianity, are the most vivid dramatizationsof this.